MOB: Sending in a Second Soul?

TFE LIVE: Today, Richard Pound (CAN), longest serving member of the IOC, with his views on the postp

SOUTH ATLANTIC OCEAN – Four photos and two on-board videos tell the story this (Saturday) morning better than the many words written by the individual teams on their web pages, Facebook pages, Instagrams, and tweets. There is, however, a good summary of the current situation on the VOR website here as the boats race north from Cape Horn and past the Falklands on their way to the Leg 7 finish line at Itajaí, Brazil. Key excerpt:

An easterly-moving front swept across the back of the fleet first, allowing them to turn towards the north (and the finish in Itajaí, Brazil) much sooner than leaders Brunel. Dongfeng and third-placed team AkzoNobel profited massively from Brunel’s misfortune, shaving huge chunks off their lead in just a few hours.

Having sailed more than 6,400 gruelling miles, around half of those at the front of the fleet, Brunel is now locked in yet another fight for the top spot that could go down to the wire.

“It’s painful for us because the boats behind us got the shift first,” Bekking said. “We’re going to come all back together again, but that’s yacht racing… It looks like the finish of this leg will all come down to the last 200 miles, which we’ve seen so many times. It will be game on.”

Vestas 11th Hour Racing arrived in the Falklands, having motored there after being dismasted yesterday (Friday) morning. The crew had to cut away the broken rig to save damaging the hull. Hopefully, the rainbow in the nice drone photo below by Vestas OBR Jeremie Lecauday is auspicious, as Skipper Charlie Enright and Team Director Mark Towill assess their options – fly a rig into Port Stanley? Ship the yacht to Itajaí, fit a replacement rig, and race Leg 8 to Newport, RI? Ship the boat to Newport and continue the race from there?

Meanwhile, skipper Dee Caffari's Turn the Tide on Plastic has decided they can continue to race, albeit at reduced sail hence speed, after assessing damage to their rig, specifically one of the "spreaders" – the horizontal struts off the side of the mast. Ms Caffari explains further in this raw video from aboard the yacht.

AkzoNobel continues to plow ahead, and the raw video from off the boat, below, contains, well, some rather raw language and documents the re-setting of a broken nose so well that you can hear the snap when it goes back into place. Your Ed. has seen and heard it done to a hockey player by the team doctor in the locker room, but by a sailor doing his own nose on the yacht during a race?

MAPFRE revealed in a post to their team website that they had a smart provisional plan in place all along, as they had done in previous races, in case repairs were necessary at Cape Horn. Skipper Xabi Fernández wrote:

It has already been a few days without writing much from the boat. It has been so much going on that it has not been easy at all.

Tough leg this one, for many reasons of course: emotionally, physically hard on the boat and gear… As usual the Southern Ocean has been a hostile place to sail, or simply to stay.

It has been the coldest one of the last editions and weather ways it has been up there too. For us in MAPFRE, starting with a problem in the mast in day 2 or 3, I don’t remember anymore, it has been challenging. How much to push, how much to safe… Obviously we have pushed hard and we have been lucky enough to make it to the Horn in quite a good position.

24 hours ago, when the main broke in two pieces, it was hard for us. Our idea was to keep pushing to the Falkland Islands and try to repair things a bit more there, but the main couldn’t hold anymore.

As we had planned before the start of this leg -and like we did in the last two editions of the race-, we had a team in Ushuaia ready to step on a boat and meet us in Cape Horn or somewhere close to do some repairs of needed. Once again our team was there, just 20 nm away from where we suspended racing, so the plan could not work any better.

We glued the track properly and hopefully fix the mainsail good enough to make the whole way to Brazil. We will need to see if it makes it or not.

Today bad news came from Vestas 11th Hour Racing, who has dismasted, a consequence of the hard Southern Ocean we have just left behind.

The weather is not great for us from here to the finish, and it looks we might get there several days after the leaders… We just can do whatever is good for us and then wait and see what the chances are to get closer to any other boat.

The spirit is good on board and we are happy with our performance, as we are aware of the problems we have been dealing with since the very beginning of the leg.

We will be shortly in Brazil, ready for a good rest and another massive push for the last third of the race.

Finally, barely any mention from VOR media of Sun Hung Kai/Scallywag except via the final sentence in this morning's press release, "Team Sun Hung Kai / Scallywag continues to make progress towards a landfall on the west coast of Chile, early next week." 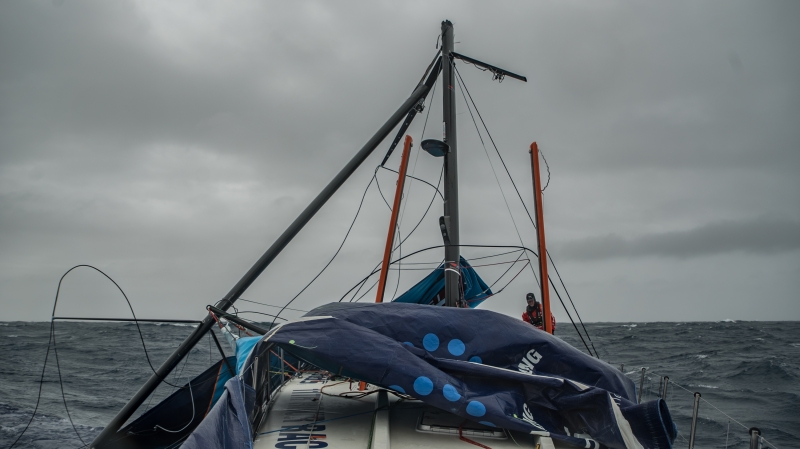 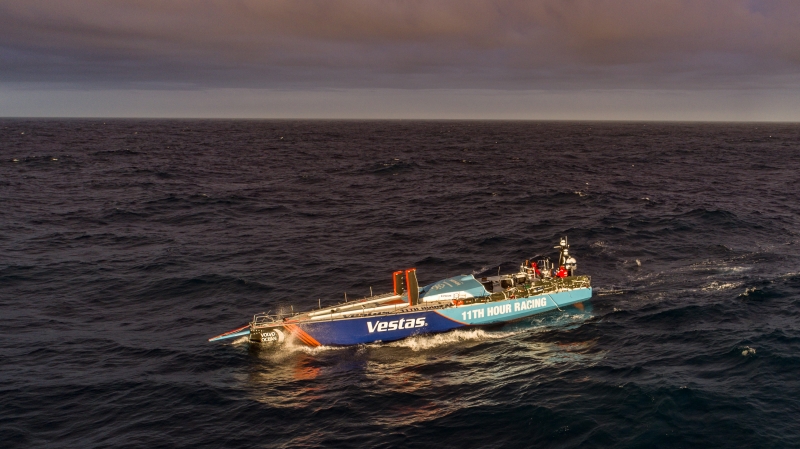 Two other newly-released photos from Vestas, from just after the dismasting yesterday, and as they are motoring the 100 miles or so to the Falklands.

Turn the Tide on Plastics continues to race under reduced sail.

Raw (in every sense of the word) footage from on board AkzoNobel. Have you ever seen, and heard, someone re-set their own broken nose?